Part 3 is going to cover what can be the most time consuming, nerve racking, and important processes when building an ARF. Gluing in the horizontal stabilizer perfectly spaced and perfectly aligned. I think the importance of this step is often not realized and modelers often end up with a misaligned stab & elevator which will lead to unusual flying habits. Check out the last section of Scott's article Assembling your new ARF to read his explanation and tips on "Squaring The Tail"

One model-specific thing to note with this MXS is that before you even get to the alignment of the stab, you have to make sure to install the elevator UPSIDE DOWN FIRST before sliding the stab in. (see pic below taken from the official assembly manual) This is due to the large counter balances on the elevator and the fact that they're larger then the opening for the stab, so you need to slide it in at an angle. Once inserted into the fuselage the elevator can be rotated 180 degrees and placed in the proper location. 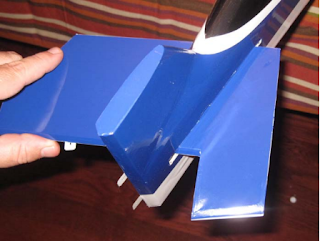 After the elevator is in and rotated correctly, slide the horizontal stab into place. This is where the fun begins! The first alignment process is to make sure the stab is aligned with the main wings. I've found that using the wing tube is the easiest way to do this. Insert the wing tube and hold up the tail while looking a the plane from behind. Visually line up the stab and wing tube. From here, you'll be able to see if it's aligned or not. If it's not aligned, then you'll either have to add some shim material (I usually use strips of cardboard) or sand down the material opposite of the shim. You might get lucky and not have to do anything. You might only need to shim...or you might have to shim AND sand. About half of all ARFs that I've build have needed some adjustment here, so be prepared. Not fixing this can lead to unexpected traits during pitching of the plane in flight. Attempting to remedy this after the stab have been glued in place would be a nightmare so taking care of it now is the best bet. This, unfortunately, is the nature of the ARF beast. 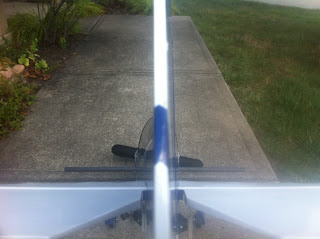 After you have aligned to the wing, you need to square it with the wing. I've heard of some people measuring from the front tip of the horizontal stab to the end of the wing tube. This seems like a good idea except you should keep in mind that unless you remember to get the wing tube exactly centered in the fuse, you'll never get the measurements correct. I suggest attaching the main wings at this point and measuring from the same point of each wing, to the same point on each stab half. (corner or end hinge line are examples) For me, this is the most time consuming part. I find it helpful to measure each half of the stab to make absolutely sure it's centered in the fuse. After that, I take a tape measure and start adjusting until I get the exact same distance from the wing to the stab on both sides. You'll find that you'll figure out what the magic measurement is, but the hard part is getting it!

Once everything is perfect, put a few drops of CA on the stab to lock it in place. Now you can fully glue the stab in with CA. Congradulations! You're done with what I think is the hardest part!

The last thing to do is attach the elevator with the supplied CA hinges using the same method we used on the ailerons.

Email ThisBlogThis!Share to TwitterShare to FacebookShare to Pinterest
Labels: MXS