The first magazine I'll be talking about is RC Model World. this is a UK based magazine established over 20 years ago that now features a free plan and over 115 pages per issue. I first found out about this title when I was looking for information on the Grauper Yak-11 Reno Racer ARF of Czech Mate. I found that RC Model World did a review on it in their May 2012 issue. I purchased that issue on my iPhone and enjoyed the magazine. I wanted to base my review on the experience with an iPad, so I will be officially reviewing the August 2012 issue.

RC Model World is a fine magazine. It's large. The August 2012 issue was 124 pages with 37 of those (~29.8%) pages being advertisements. (others' count might be different as the judgement of what is and isn't an advertisement might come into question, but this number reflects my opinion) There is a lot of great event coverage from the UK with lots a great pictures of fantastic models. I loved the two aerodynamic articles, one about flying older biplanes and one speaking to tip stalling. 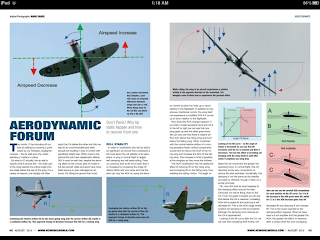 I do have a few things that struck me odd about some of the articles. In the new kits and accessories section, they mention both the FMS HS-123 and FMS Stearman. Both of these models have been released by FMS  at the very beginning of this year and were announced many months before that. Another dated item I noticed was a feature article on the Hitec Aurora 9 which started shipping in Oct of 2009. Finally, there was a feature article on the Hanger 9 RV-8. To give you an idea on how long this model has been out, Jim Booker created the review video from Horizon Hobby before he retired. The review video was published on YouTube on April 9, 2009.

Are the older items in the feature article there on purpose? Are they trying to review and talk about models that have slipped through the cracks? All of those items are cool, but I personally don't buy RC magazines to hear about 3-4 year old products.

Use of Technology
I give RC Model World 1 star out of 5 in this department. The one star is there simply because it's digital. There's not much to discuss on this point because the digital version is simply a "pdf-like" version of the printed magazine. There is no video, slide shows, audio, clickable links, or slide shows. When you view the magazine in portrait mode, you see each page and if they had a picture spanning both left and right pages, you'd only see half. When rotating the tablet to landscape, you see both left and right pages as if you were reading the printed version. This seems nice at first but I found myself having to zoom in on a lot of text to even read it. 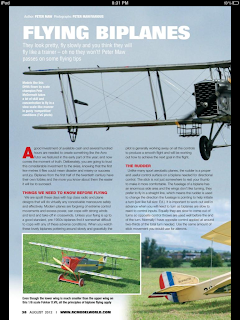 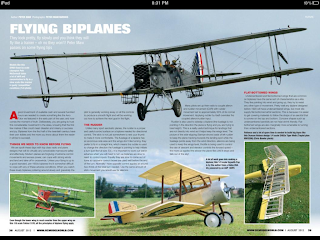 Another item I failed to see were the free plans. I figured there would be a cool easy way to see the plans (that would be included with the digital version) and maybe an option to print. Unfortunately, I did not find any information or mention of the free plans to coincide with the digital version. I have written the editors of the magazine with a few questions and I have not received a response. I will update this review accordingly if I do hear anything.

Content
I give RC Model World 3 out of 5 stars in this area. The event coverage is great and I really enjoyed the technical articles. The reviews were on par with the typical RC magazine. I wold have given them 4 stars if it were not for the older products discussed. I do want to convey that I enjoyed reading the articles.

Ease of Use
2 1/2 out of 5 stars for this category. This digital magazine reads exactly like a printed version. If you want to jump directly to page 100, you have to either page-turn 30-40 times or click the screen to bring up a smaller scroll wheel at the bottom to scroll to the desired page. There is no navigation outline or ability to tap on items in the table of contents to jump directly to a page. That being said, I had no problems navigating and reading the entire issue as they intended. I also think that someone who is not interested in bells and whistles and/or is used to a traditional magazine would have no issues reading through.

Layout / Designs / Looks
3 stars out of 5 for a great looking typical RC magazine. Lots of great pictures, diagrams, and attractive layouts. That being said, the digital version is exactly the same layout/looks as the printed version. I'd love to be able to talk more about the design, but being that it's no different on the Ipad, I'll leave it at that.